It is with great pleasure that we present in an exclusive broadcast in the very day it’s been released the compilation “Ici dans le peuple oublié” (“here is dancing the forgotten people”). The project was curated by Marseille’s Metamophore Collectif, a prolific collective of friends and artists which created the underground safe house le Meta.

For quite a time now, the Metaphore Collectif team has been thinking about a way to keep track of its history, to anchor it over time. The recent health crisis precipitated things when after a forced closure, a big call for help was launched to save the Meta.

Thus was born “Ici dans le peuple oublié”, including 64 tracks from 64 different artists. The compilation is going to be released on the Metaphore Industrie label, today (this coincides with the Bandcamp Day where the platform is not taking any fee). It brings together artists like Low Jack, December, Hajj, EMMA DJ, Mika Oki, Maoupa Mazzocchetti, Krikor, Nick Klein, amongst many others.

All profits from the sales will be used to help Meta reopenning, and keep the free party in Marseille.

To contextualize the release and to understand more about the Marseille’s collective, the Veneno team conducted an interview with Vazy Julie, member of Metaphore Collectif.

How did the Metaphore Collectif get together?

Born in 2010, Metaphore is above all a big friendship story driven by the common passion of its different members for electronic music, for their city Marseille, and for free & radical parties. Its different members knew each other for a very long time and I think that’s the strength of the collective! I met Rafael at the primary school when we were 6 years old, we have 32 now, and he’s my brother ! Chloé and Simon knew each other since middle school. Nicolas and Rafael started to be to do music together. Ugo came to the very first Metaphore’s parties, and we’ve never left him since. I also spent 10 years in couple with Simon. We all have a special intimacy, and our links are so strong. Now we work together, but we basically live together. I think Metaphore Collectif cannot exist without this history. It’s quite natural that the super bunch of friends met around a common desire: to make music together. At first, Metaphore collective was just a group of friends, then very quickly became an obsession, then finally a profession.

What was the process for curating this massive 64-track compilation?

OMFG hasn’t been restful! It’s been a while that we’ve thought about how to keep a trace of our 4 years spent at Meta, 4 years and a multitude of memories going with it, a lot of friendships forged, a crazy musical and professional enrichment! The idea for this compilation became very clear when the systemic crisis caused by the epidemic of Covid 19 forced us to close our local association Le Meta. Facing an extremely precarious financial situation, we launched a big call for help to our members and public, as well as to all the artists who passed through the Meta hut. On one hand there is the pot, on the other hand there is the compilation. Almost all the artists replied, and this is how this compilation of 64 tracks was born: very fast ! The only advice that were given to the artists was to do a track thinking about their experience at Meta. The result is beyond all our expectations. It’s exactly like the place we made: full of humanity and heart, radicality and freedom. I worked with Ugo to recover all the tracks, while Lorenzo, whom I thank again, mastered them in a blitz, all day since 2 months. We’ve been lucky to work with people who are passionate and professional, and it’s made things easier.We managed to keep the deadline, for once, and even though we’re exhausted, we’re very excited and thrilled.

Before the pandemic, what was a typical night at le Meta like?

It is so difficult to give a short answer to this question. Every night was different and special. But, if I can say what Meta is, I can talk about this bubble in space-time. First, access to the place is not easy. It’s via a private facebook group, and you can only access it if you have a ticket bought in advance. You have to take the tramway to get out of the city, then go through a small dirt road to reach a wire fence in which there is a hole. Once you have passed this hole, you arrive in front of the big blue metallic door of the meta. There you will be asked for your membership card and you will be reminded that the only rule inside will be respect for the place, for others and for yourself. Then you’re in Meta. Most of the time you arrive at midnight and leave at 6:00. Inside, it’s cozy but raw. What matters most is the sound system, and the smile. It’s warm, even in winter. The only light source is the red neon above DJ Booth. Upstairs there are sofas for resting, and at the end of the hallway a small garden for fresh air. The people are friendly, they talk to each other and seem to belong to the same community. I think we’ve succeeded in creating a festive place where people get wild and free, but a place where everyone takes care. Often we get phones or wallets returned, and many times we’ve seen people help others if they’re drunk. In the club part, it’s a jungle! People are shirtless, sweaty, wild, smiling and free. Like you rarely see them anywhere else. The music is always good. What will always stand out for me is when we turn on the lights at 6 o’clock. Usually the one who plays wants to go on a bit. The room lights up, it’s plain and it’s the last cry of the tripe. Everyone goes crazy one last time, before calmly taking the opposite route to start a new day. The clock can start ticking again.

Do you think venues such as le Meta can learn something from this systemic crisis we are facing?

Yes, ofc, we all have to learn from what happened today. A place like Meta, meaning independent, is much precarious than a place financed by the state. But the positive thing is that we don’t have to justify ourselves to anyone because it is an associative place. If we want to reopen tomorrow we can do so, and I remain convinced that this decision is becoming increasingly political. We asked ourselves a lot of questions before closing. We decided to do it because the most important thing is to take care of people. Today, big businesses, subways, bars, restaurants, shops and schools have reopened. But the government continues
to confine the world to nightlife and partying. Reopening its doors is a political choice at the moment. And only 100% independent places like the meta can do it. We’re glad we’ve worked so hard not to depend on anyone. On the other hand, we realized that everything is hanging by a thread and that our professions, in art in general, are fragile and precarious. Also, it is a general awareness of ecology and the need to limit the impact of our work on the environment. Simo cell who participated in the compilation and who is also a friend has written a very relevant tribune on this subject. With Meta, we had already chosen to limit the artists’ travels, and to focus on the local and national scene. But that doesn’t stop us from taking advantage of an artist on tour. We need to find a more coherent way of working. Meta is the proof that working as much as possible on the fringes of the system could guarantee the durability of our professions, who are more passions, of what we live for!

What are the future perspectives for Le Meta and the underground scene from Marseille?

The Marseille underground scene is in full swing. I think it will continue to grow and I hope so with all my heart. It’s been a hard time this shitty period, but what’s good about Marseille is that all the initiatives are DIY. About Meta, we really want to reopen our doors of course, but our financial losses are huge, and this compilation will be decisive. The pot is still online and we have already received a lot of support. All the profits from the sale of this compilation will be used to cover our expenses and will allow us to reopen the meta, we are confident. But anyway, here or elsewhere, the meta experience will continue to exist, we won’t give up anything! We also want to do more free parties in nature, to fuck the system as possible we can, and above all to give to the music the free space it deserve. We have a good sound system, a good audience, good artists, and a ton of motivation and ambitions. Sky is the limit and love is power, no? 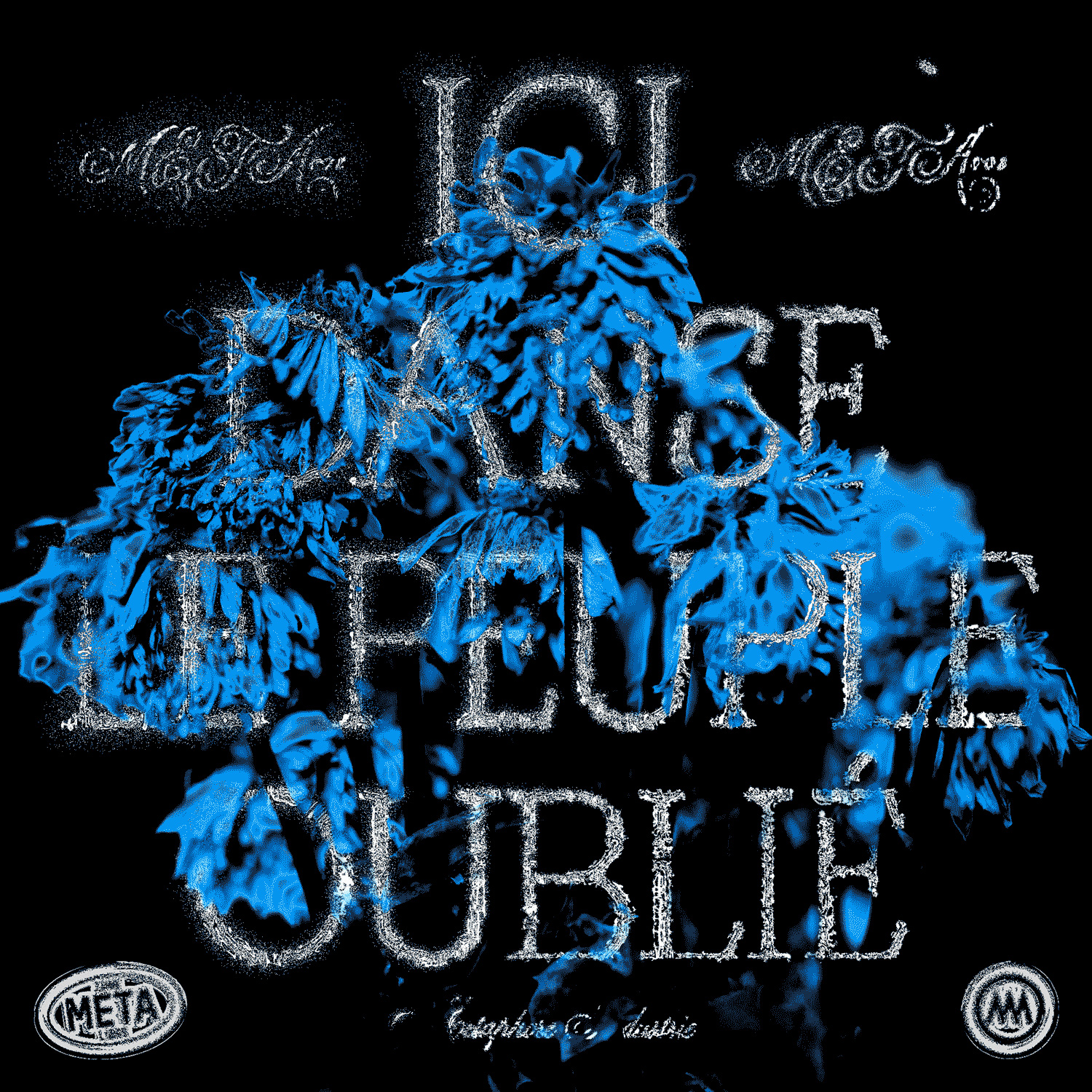