Today marks another release by the prolific Belgium based composer multi-instrumentalist and DJ, Maoupa Mazzocchetti. His album “UXY DOSING©” is now available through Marseille based label Brothers From Different Mothers. To the Veneno team is a huge pleasure to present an interview.

Maoupa has his projects released in various labels, from the intriguingly original PRR! PRR! to the cold wave oriented Mannequin. In his productions it is possible to draw a line between dancefloor focused music and freakishly wild experiments that draw the attention of the most ruthless dancers, all of this packed in a futuristic pop aesthetic.

On his new album, Mazzocchetti introduces the term MDM (Maximal Dance Music) to the electronic music dictionary, which envisions a post minimalistic musical era that embraces characteristics of sound art and other unusual influences outside the typical electronic music template. Along with him, the album also features names like Zuli, Emma DJ, Vica Pacheco, Phillip Jondo and Chermaine Lee.

To go deeper in this project, we asked Maoupa some questions and we also got an exclusive mix, which will be broadcasted in our Casting Call series today.

1- How and when your mix was recorded?

I recorded it in Brussels, at the LYL Radio studio that Mika Oki manages. I was quite late for sending it because I was organizing the release party of the album in 6 act through an Accousmonium of 20 speaker associated to a sextuor I build for the occasion, The UXY Dosing Orchestra. The capacity was very limited it’s why I did 6 act (as theater, cinema, art gallery, as all artistic medium except music at the end). We build this with Mika Oki. It was so good playing music for real people.

2- Do you think the mix has any kind of dialogue with the “UXY DOSING©”?

At the end I’m trying to promote the ‘UXY Dosing’ universe right here, so… Yes i guess. The way I’m deconstructing or reconstruct the song, the tension, the suspension of notes, and for sure the contrast between density and silence. It’s always about silence.

3- What are the main influences behind the production of “UXY DOSING©”?

The new music genre UXY Dosing© I created with this album is associated with the high consumption of MDM (Maximal Dextrose & Milk). I tried to create a new sonic palette I’ve never heard before.

I used a digital machine made for sound design, the kind of max msp but more crazy, but I also works with old equipment I love too. I just completely destroyed, stretched them to make them unrecognizable and quitte fresh and new.The synthetic sugar and the state of maximum excitement it provides has influenced me quite a bit.

You see when you eat an Oreo, you feel this creamy feeling in your mouth but without having the real taste of milk cream, simply because it is not, it is synthetic in fact. Through this topic I created a new sound palette to create a new kind of electronic music (UXY Dosing (UD) or Maximal Danse Music (MDM) for this album. I was lucky to be touched by the grace of Dextrose very young with Grandma who offered me kindergartens surprises every Wednesday.

4- You mention giving birth to MDM (Maximal Dance Music), can you talk more about the concept of this musical genre?

Yes, this album is inspiring by the effect of the MDM (Maximal Dextrose and Milk) but is made as most of the time consumed through a capsule while listening to this (Maximal Dance Music) genre.

I noted that there is always a substance associated with a music genre and especially that influences the sound. Like what marijuana is to reggae, the exciting chemical to punk/rock, ecstasy to club music, lately codeine and a certain rap, and dextrose to UXY Dosing  !

Except this is much more subtle and vicious. Sugar everyone consumes, it’s a legal substance recovered to the extreme by very creative people to find the most effective and scred way to make us addicted and sell it to us. This new album follows from all that. Refined sugar and organic synthesis.

5-  Your music can be sometimes so complex, with some really non-intuitive outcomes, which for us, gives all the personality to your work. What is your approach to sound design and how you sound like this?

I was quite influenced by some strange dubstep, English hardcore, breakbeat from W3C, G. Jones, Eeprom, Aphasic, Detboi… and much more, but I wanted to keep the vibe of the trap rhythm but also some techno, electro and electroacoustc without to forgot to keep melody alive, the kind you seems you always knew before..

But I wanted something very dense, with a new sonic palette never heard before with lot of changement and break as you’re dancing on a carpet in a club, and sometimes it’s quickly removed from under your feet to make you fall to the ground. An hyperactive sound…

6- This record features lots of fellow artists, how do you feel about working with different creative inputs and how does this affect your work’s final result?

All featuring in this album are made with artists I really like as human and artists. I’m relatively close from them on a certain point. When you’re working with someone, you’re opening doors you would never seen without them. Often it became something stronger… and sometimes very different. It help you to learn a lot, as technical stuff than about approach. And to be honest sometimes it makes me more confident about what i’m doing. It’s not easy to work alone, I mean, being you’re own « juge » to decide for exemple what you want to keep or erase on what you’re currently doing. Even more with this type of « complex » sound.

I met Vica Pacheco during a gig we was sharing at the Beursschouwburg in Brussels two years ago. When I finished the instrumental of Moon Is A Bell For Meteor, i felt it miss something in the song, so I directly asked her if she would like to try to singing something surrealist on the instrumental. She’s really into this kind of disconnected surrealistic world. She was the perfect writer and singer for this song. She’s also a part of Xolot and The UXY Dosing Orchestra.

Ahmed and I are sometimes sharing music. Back in 2019 he was the first I sent some of this new research of maximalist approach with that new sonic palette, obsessed by the digital copy of organic elements and generous textures. He liked it a lot. So I proposed him to send me a loop which I could start to compose and add stuff on it. It became this serenade. The initially loop ZULI sent me is unrecognizable. So we’ll probably make an other song more fidel to the main loop.

About EDMeme, Phillip and I are friends, we often listening lot of r’n’b when we are together. We’re also making some music without any goals. So we made this one initially for Phillip’s release that is supposed to be out in this uncertain near future — so you can consider this song as a promo meme.

During a tour in the U.S back in 2016, I passed by Issue Project Room in New York, invited by my friend Leila Boredreuil. We made some music together and at the end we organized a show in situ, where Leila invited Charmaine Lee to perform too. I met her at this time and her performance blow my mind. Later Charmaine sent me the recording she called Rekt. I used to play it a lot during DJ sets, radio show and live. Last winter on NTS I mixed her voice with a kind of ambient instrumental I’d made, initially the instrumental was made as a solo ambient song. It works so well to me that I came right back to my studio in Brussels to make it into a proper song.

Maoupa Mazzocchetti & The UXY Dosing Orchestra a sextuor including myself on guitar, trumpet and electronic + voice by Vica Pacheco + a modular synth by Mika Oki + a traverse flute by Emile Barret + a contrabass by Giulio Erasmus + a drum by Daniel Dariel. We’are playing at La Gaîté Lyrique the 24 of March. 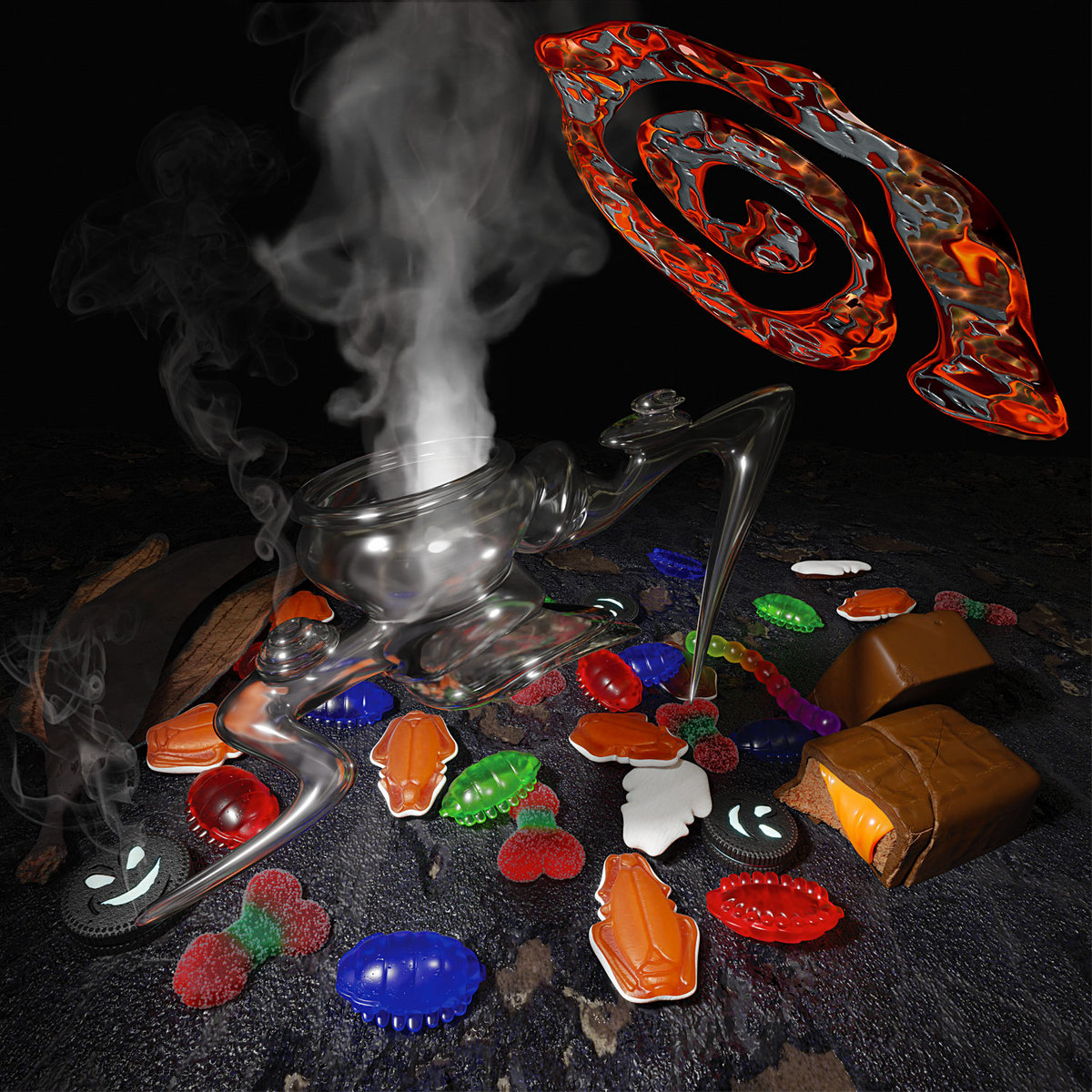