Kill Me or Negociate

Today the record label from Lyon, Brothers From Different Mothers, is announcing the release of a truly special album: “Kill Me or Negociate”. This 6-track collaboration between French DJ Simo Cell and multifaceted Egyptian artist and spokesperson, Abdullah Miniawy was just released digitally, while the vinyl version is to come in early November.

Simo Cell is a producer and DJ recognized in the international electronic scene for his ability to dialogue with various musical genres. Ingeniously switching from drum’n’bass to trap, from techno to experimental music, his productions and DJ sets are an eclectic blend of his rich musical background.

Besides BFDM, Simo Cell released albums in some of the most interesting record labels in Europe such as Livity Sound, Timedance and Wisdom Teeth. His DJ sets were presented lately in important festivals, passing from Dekmantel, Nuits Sonores to Nitsa.

Simo’s partner in this project is Abdullah Miniawy, who has several artistic ventures. His skills are oriented to writing, chanting and acting. However, he is also a prodigy musical producer: in 2016 he released Darraje, together with the Munich based trio Carl-Gari via the prolific record label The Trilogy Tapes. This work was both well received by the public and also recognised as one of the most important albums of that year.

Abdullah has also composed soundtracks for films and dance pieces. He acts as well, having portrayed the main character in the Tunisian film Tlamess, directed by Alaa Edine Slim. The film was exhibited for the first time in Cannes film festival e72.

In spite of the artists’ distinct backgrounds, the album reflects a solid partnership developed between them. You can hear introspective ambient passages and ultra modern layers of synths and percussion, all wrapped by Miniawy’s deep vocals.

This is the type of work that is able to reshape club music, elegantly merging socio-political charged contemplative moments with the energy of the dance floor.

Having the opportunity to write about this collaboration is also an honor for the entire Veneno team. So we are also delighted to present a small interview we’ve done with the artists, in order to dive deeper into this terrific collaboration.

1- How did you guys get together?

We met on myspace (laughs). Actually we were both living in Paris without knowing it. I knew Abdullah’s music, and Abdullah knew my music too. One day I played one of his tracks on NTS, he sent me a mail and we started to chat. We met to drink some beers in Paris and then decided to try jamming in my studio. That was it. The first studio session was amazing. We decided to keep up the momentum !

His name was always around me, I wrote an email to thank him for playing one of my tracks with Carl-Gari on Nts Radio then it was a great chance when we found out that we live in the same city Paris. We got connected quickly! We found many things in common & we thought of trying something out.

2- What are the main concepts behind this album?

Music wise, there’s a strong focus on mixing organic and more electronic sounds. We also wanted to take elements and codes from trap and pop aesthetic and to use them in a very personal and fresh way. I think  we made a musical UFO ! Abdullah will tell you more about the lyrics. Azako Mimingene ! Ratao Lahi !

The content is very special to me in this record; it is about an imaginary journey of a hungry man on a ride who slaughters his only mean to reach his point to feed himself.

All came up in the studio, in a sudden, nothing was prepared the pen & the paper were in my hands while searching for a melody.

I used ‘Tawreya’ it’s a skill in Arabic literature to make the same phrase carries many different meanings to each reader or listener from any background. In each text there’s a connection with my personal life, describing the quick change since the Arab spring for example in Locked in Syndrome I complain to the first person who brought me on stage for the first time in Tahrir square that changed my life 180, I complain of being stuck in his body! Without recognizing where I am, meanwhile trying to release the reflex of the protestors’ rage that pushed me where I am today like a Pendulum.

In Pending in the Pattern, it is a kind of relief after the main character reaches his destination. Music Gene is the slaughtering moment. Locked in Syndrome is the exasperation that pushed the main character to start his travel.  The instrumental ones for me are like a camera or a drone that watches the entire movement vertically.

3- Can you tell us how the process of condensing your different musical and artistic backgrounds in one project was?

Simon
Abdullah has a strong Jazz Background but he’s also involved in many different projects and knows a lot about Modern electronic music, so it was really easy to work together. It felt natural. We like the same stuff music wise and have quite similar sensitivities. We have different styles but the same approach : Trying to push boundaries in what we are doing is what brings us together.

Abdullah came to the studio with his trumpet and mic, I had a few synths and a 808, and we started to jam together. I’m not really used to jam, I’m more a studio rat. But I really enjoyed trying a new way of making music. We recorded long sessions that I had to arrange later on. Sometimes I prepared beats for him and let him choose his favourites. He found the melody of music gene in front of my eyes in 10min, so astonishing !

It was very natural, I felt I know Simon already that is also the criteria for me when I work or collaborate with any artist I look deeply in the soul despite the quality of music call it connection or call it written coincidence. Technically, it was hard to write in forms or in patterns, but it was challenging to disassemble my style and to assemble it again.

4- Everyone is talking about “the deconstruction of the club culture”. Do you guys think we’ll ever be able to build a more humanized club environment?

We already are ! I mean, prioritizing quality over quantity when touring, thinking about my ecological impact, using social networks in a reasonable way, focusing on the music before anything else, taking time in clubs before playing to talk with people and share… These are the kinds of things I’m doing. It’s a fight ! Btw, I decided to take some commitments and recently wrote a letter about impactful alternatives for a touring dj : https://medium.com/@simonaussel/impactful-alternatives-for-a-touring-dj-f739697e34a1

In my opinion, thinking about a more optimistic future or trying to debate about it won’t change anything. Actions matter the most ! The real question is : what are we willing to do concretely ?

I am not following up with club scene. I belong to theater curtains. I stopped djing radically even if it was a free money after or before my live performances to leave the space to ‘the talented ones’ who are in need to these opportunities.

I go rarely to party mainly when there are some interesting producers or an interesting line up something about sound not only appearance & fashion. I know it is a touristic, rotten, and capitalistic since years I mean until when this wheel could keep going anyway. It has been breaking principles, unity & quality; we have been watching the scene eating its own tail sadly. I guess the problem was never the clubs themselves; artists share a huge part of the problem… Anyway, let us keep diplomacy…

I talk about myself, I focus, I learn all the time more than ever since I saw people crowding again in front of MacDonald’s right after the confinement.

5- What is the horizon for the duo?

We’re preparing a live set and want to play together ! Also my plan is to come to Abdullah’s and offer him a turn cap. The poor boy doesn’t have one to open his bottle. For the rest, I prefer to let the doors open by itself. Destiny, please show me the way !

You can listen and buy the full album at BFDM’s Bandcamp. 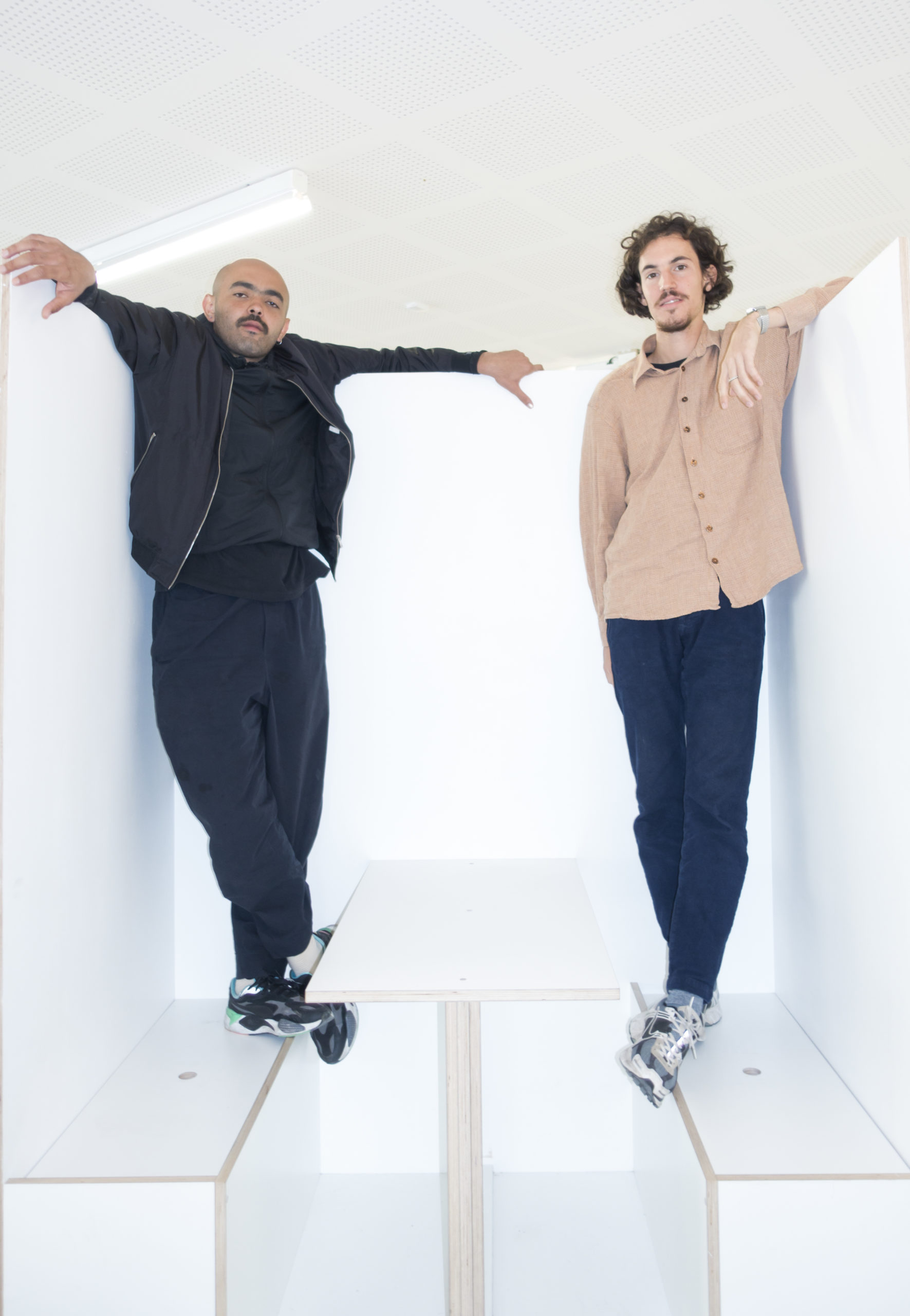